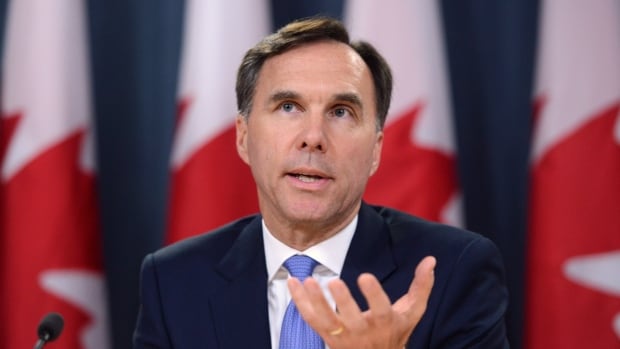 “Preliminary data received since the government implemented its most recent adjustments to mortgage rules in October, 2016, suggests that the rule changes are having their intended effect,” states Mr. Morneau’s letter to the finance committee.

“A decline in the share of new insured loans issued to highly-indebted borrowers suggests that the quality of credit is improving in the high-ratio mortgage market. This development helps to ensure that Canadians are taking on mortgages that they can afford.”

This move took guts. There will be no end of complaints by homeowners looking for the government to backstop their house price.

Now if they could promise not to bail out the banks who've misallocated capital, all will be well :-)

Morneau said the measures his government has implemented so far, including stress tests and raising the down payment requirements, have started to achieve their aim of cooling some of the country's hottest housing markets.

"It's early to cry victory, but the measures are having the intended impact," he said.

"It was probably not a coincidence that the Prime Minister and I were in Seattle meeting with Warren Buffett a few weeks before Buffett came in and decided to make an investment in Home Capital," he said, noting they didn't discuss the Home Capital specifically but spoke about the "emerging strength" of the housing market.

He noted bodies like the Bank of Canada shouldn't be concerned with intervening.

"We do believe that the federal government has an important role in understanding the market and remaining vigilant... the Bank of Canada's mandate is not about the housing market. It's very much about inflation."

Not sure how "people's big investment – their housing investment – is safe and secure" is consistent with "cooling some of the country's hottest housing markets.".. Boomers won't be happy with any decline to their retirement savings.

Also taking credit for Warren Buffet's taking advantage of Home Capital at its weakest on top of a usurious loan from HOOP, should be interesting to see how this pans out.

Bill Morneau said on Tuesday that while there were pockets of risk in the housing markets in Toronto and Vancouver, there was no link between that and the troubles facing alternative mortgage lender Home Capital Group Inc.

"It is true that we are facing some pockets of risk in our housing markets in Vancouver and Toronto, and certainly it is true that there was a challenge with this particular company. We do not see those two things as linked," Morneau told parliament.

Or perhaps just the canary in the coal mine?

"Canadians have told us they are concerned about growing household debt and rapidly rising house prices in some of our biggest cities, particularly in markets like Toronto and Vancouver. These concerns have grown over many years, and there are no quick fixes. The federal government plays an important role in ensuring that housing markets are stable and function efficiently. My colleagues and I are committed to continuing to work with provinces and municipalities to address the concerns of middle class families, and to ensure Canada's housing markets and financial system remain strong, stable and resilient well into the future."

If Canadians were concerned about growing household debt, they wouldn't have entered into it in droves. Nearly 70% are home-owners. Not much longer.. SAD!

On Monday, Mr. Morneau called the higher down payments "the right measures at the time," but said that Ottawa saw it had more work to do to tackle risks in the housing market.

Mr. Morneau said the stricter "stress test" for some insured mortgages will likely have the greatest impact on expensive housing markets such as Toronto and Vancouver, but acknowledged it will also have an impact on home buyers in softer markets, such as Alberta and Atlantic Canada. "We're trying to manage the risk for all Canadians," he said. "So we worry about someone in Halifax or Ottawa or Saskatoon as much as we worry about someone in Toronto or Vancouver."

Mr. Morneau said he expected the changes announced Monday would have a "modest" and gradual effect on the Canadian housing market. "It's hard to state with certainty what the outcome will be," he said. "For some buyers they might defer their purchase for a little while; for other buyers they might decide to buy a slightly less expensive home."

Looking back on this, the stricter stress test had zero effect between October 2016 - April 2017 when the market totally overheated. So were the banks just looking the other way?

Households rely on housing market data to make informed decisions in buying and selling their homes, while governments depend on data to design effective housing policies. Currently it is not possible to fully understand the role of foreign homebuyers in Canada's housing market since a comprehensive and reliable data set on the number of homes sold to foreign homebuyers does not exist.

Budget 2016 proposes to address this data gap by allocating $500,000 to Statistics Canada in 2016–17 to develop methods for gathering data on purchases of Canadian housing by foreign homebuyers. This initiative could involve collaboration with the provinces, such as British Columbia, which recently announced its intention to have homebuyers disclose whether they are citizens or permanent residents of Canada or another country.

Stable and secure housing markets protect the greatest investment of many middle class Canadian families. On December 11, 2015, the Government announced coordinated actions to strengthen the resiliency of Canada's housing finance system, increase market discipline in residential lending, and promote long-term stability and balanced economic growth. The Government will continue to closely monitor vulnerabilities related to housing and consumer debt and is prepared to implement further measures, should they be needed.

To me it looks like they definitely played a part. Two markets have now introduced foreign buyers taxes and were immediately impacted. Foreign buyers are moving east to Montreal now where residents are seeing price gains unlike before. That's not to say they were the only part, domestic speculators defintely got dollar signs in their eyes and wanted to take advantage of foreign buyers as well, but now that they are no longer participating, I imagine we'll see domestic speculators looking to make an exit as soon as possible, creating a bit of a domino effect.

I really believe the foreign home-buyers represent a small portion overall but that the perception of cash-rich immigrants helped create a frenzy by local buyers. Maybe when we're picking up the pieces of the housing market the government study might finally give us the result too late..